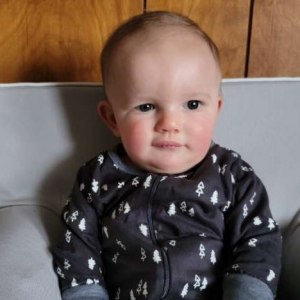 My name is Katie Harrell. My husband’s name is Garrett and our son is Reed. We live outside of Greenville, North Carolina. Our son Reed was diagnosed with Alagille Syndrome when he was almost 2 months old.

My pregnancy was normal. My husband and I were both ecstatic about having our first child, then even more so because we were having a BOY! I had a scary delivery. Reed decided to make his entrance 4 weeks early due to my placenta rupturing. I was rushed to the OR and required an emergency C-section. Reed was small but since he was early it was not unusual. He was 4lb 12oz at birth. Our stay in the hospital was normal and we were discharged on Sunday after delivering him on Friday. The first month at home was a blur. After his 1-month birthday, Reed began having feeding issues. He was throwing up almost everything he ate. His weight was not improving and he even lost weight some. We had to be hospitalized twice during the 2nd month of his life due to failure to thrive. This means that he was not maintaining and gaining weight as he should have been.  The 1st admission they did testing to rule out pyloric stenosis and other things, but the testing was all negative. They ended up switching his formula and he seemed to do better. We were discharged after 2 nights in the hospital. He did well once we first came home but within a few days he was back throwing up everything he ate again. The 1st time in the hospital they did a generic genetic panel, and everything came back negative. The second time we were in the hospital he was still having the weight issues. I advocated for him to have a NG (nasogastric) tube placed to help provide him nutrition. This time while in the hospital, his GI physician recommended a more in-depth genetic panel called a cholestasis panel. It would take 3 weeks for the results to come back. Once the NG tube was placed, we were set. We were discharged again after 2 nights. A few days later we followed up with Reed’s pediatrician for a weight check and he was noted to have a new heart murmur. His pediatrician set us up to go see cardiology immediately for evaluation. The cardiologist was a new young physician that took a lot of time discussing all of his feeding issues. She had a thought that he might have Alagille syndrome and ordered liver function labs to be drawn. The pediatrician followed up with a call and said his liver enzymes were elevated and that he likely had Alagille Syndrome. We were still awaiting the results of the cholestasis panel. My husband and I were in shock. We had never heard of such a disease and were scared of the unknown. I remember crying the rest of the day. I had a feeling like I had given my son a death sentence. A few weeks later the cholestasis panel came back indicating he has 2 mutations on the JAG1 gene which, accompanying his peripheral pulmonary stenosis and his liver issues, is diagnostic for Alagille syndrome. We now know Reed has a mild/moderate case of Alagille syndrome. He has liver involvement and peripheral pulmonary stenosis and the prominent forehead. He is still an infant so we will know more as he progresses. I feel very thankful that we encountered the young cardiologist that knew what Alagille’s was and pushed us to get the liver function labs done. His pediatrician had only ever had 1 other child with this disease in 30+ years of practice.

Reed’s medical schedule while I was home on maternity leave was insane. We stayed in the hospital a total of 3 times excluding his birth. The 1st two times were prior to his diagnosis. The 3rd time was for placement of his G-tube (feeding tube). He sees multiple doctors every few months. He sees his pediatrician for his well-child visits, GI for his Alagille syndrome management, we saw ophthalmology, Speech therapy, and he sees cardiology every 3 months. We also see a genetic specialist at UNC Chapel Hill to determine if myself or my husband are carriers of Alagille. He also had multiple visits with a pediatric surgeon prior to placing his G-tube. Now he sees her yearly. He also has to go every few months to have his liver labs drawn to check his liver function and his bile acid levels. I am a Physician Assistant in ENT and it is very difficult to manage all of his appointments and still work. Luckily, my husband is a taxidermist and is self-employed so his schedule is a tad more forgiving.

This has been difficult. Having to stay with Reed in the hospital was tough. His medical bills are high and since my husband and I make over the minimum amount required for help, we are not eligible for any government assistance. He has several medications that he takes daily and lots of high copays for all the providers that he sees.

What I would tell newly diagnosed families is that you are not alone. It is scary at first, mostly because of the unknown. It is not your fault that your child has this condition. Try and do what is best for your child and show them that they are loved. It has been nice to connect with other parents that have children with ALGS. They understand the struggles that my husband and I face daily. It is also nice to see what older children are experiencing so I can get an idea of what it will be like for Reed. Alagille syndrome affects all types of people and can be any degree of severity. This can happen to anyone. My hope for the future is that there will be a cure for this disease. At the least, the medications used for itching could be reduced in cost.