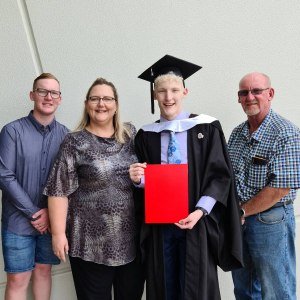 We are the Bate family.  We live in Brisbane Australia.  Our family consists of our ALGSA Warrior Jordan, his twin brother, Harrison, and his parents Adrian and Leisa.

Jordan and Harrison were premature by four weeks and Jordan showed failure to thrive.  Within the first few months of life we discovered he had all indicators of Alagille Syndrome. At the age of 2, through genetic testing, it was confirmed 100%.  In Australia in 2001 there wasn’t the amount of testing that there was in the States, but they were doing research into Alagille Syndrome so we took part in the study and that is how we got our diagnosis.

Jordan predominately had liver issues and mild portal hypertension.  He has the facial features of Alagille’s, but nothing else.

Around the age of 5 Jordan experienced a couple of broken bones due to Osteopenia.

This was the start of many of Jordan’s childhood issues. Jordan spent a lot of his childhood in and out of hospital.  Due to failure to thrive, Jordan ended up with a feeding peg. Unfortunately, whilst doing this surgery, they perforated his stomach then he was taken in for emergency surgery where he was touch and go.  We spent lots of time in and out of hospital whilst the team gave Jordan regular tune-ups, as we liked to call them, of various IV treatments to keep him well.

He had chronic itch which, at around age 6, ended up with us deciding to do an external biliary diversion and this lasted him until transplant.  Jordan continued to be a regular visitor at our local hospital and finally at the age of 14 at one of his appointments he asked the team to give him a transplant.  Jordan wanted to just be healthy and had had enough of the issues he dealt with having a chronic disease.  The team agreed with him that it was the right time, so they worked him up for transplant.

After a 22 month wait Jordan received his Gift.  For him, the liver took beautifully but he had some issues after transplant relating to his bowel caused from previous surgeries he’d had as a child. Again, Jordan’s life was touch and go.  He ended up losing some bowel after this but thankfully he didn’t need any further medical intervention.  It was a long three months post-transplant to get him back on the path of gaining his strength, all whilst completing his final year of schooling.

After all this we started to notice a huge change in Jordan.  For the first time in his life, he knew what it was like to be well.  Jordan took off.  University, overseas travel and then securing his dream job have been just some of the many experiences he’s had thanks to his donor.

So, although they class Jordan as having mild symptoms of the syndrome we pray to God every day that, after all he has dealt with in his short 22 years, he didn’t have worse symptoms.  Our hearts break for our ALGSA family when we read of others who are having a tough time or who have lost loved ones to this condition.

22 years ago, I was just so lucky to have found the Alliance online.  There was nothing locally for us here in Australia so the information I got from the Alliance in the early days helped us to learn and discover so many things.  The resource we used the most was the Colouring Book for younger children.  Each year Jordan went through school in early primary, the teachers would read it to the class so they had a better understanding of Jordan and what he was experiencing.  I think that’s why he is such the outgoing personality that he is today because others around him accepted him for who he was.

The newcomers to the ALGSA family are so very fortunate for the work the Alliance has done over the years and are so very blessed with the introduction of social media where the word can get out there more and people can connect more.  The Alliance is hitting goals I could only have imagined when we started this journey and it is all thanks to the members, the ALGSA family and research.  Those that go after us will have so much more knowledge.

Jordan used to be a yearly short case study for up and coming Doctor’s at the Hospital during their exams. The knowledge of the students from when we first started doing this when he was a baby, where maybe 1 of the 4 candidates knew about ALGSA to when we stopped doing them about 15 years later, it was rare for the student to not pick his condition.

Our hope for the future is that everyone new to this has all the resources and care they need without needing to fight for it like we had to at times.  It was my knowledge from the Alliance that had me ask our doctor’s (who weren’t as knowledgeable as the doctors in the States) questions around Jordan’s care.

So, for us as a family – the best thing now – is watching Jordan grow in his job as a nurse.  Goodness knows he has had a lifetime of experience on the other side of this profession and his experience will make him an awesome nurse!