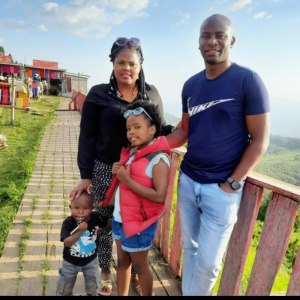 Brylejones Baraka, second born in our family, was born in October 2019. Five weeks after his birth he developed complications of indigestion, so we took him back to hospital where he got admitted for further treatment and investigation. He was diagnosed with Alagille syndrome at 7weeks after a liver biopsy was done. He later got discharged with so many medications to manage the situation. At 2 months old he started itching so bad that he got introduced to more medication. We used to bath him 4 to 5 times in 24hrs to help. At 6 months old he stopped growing because there was no digestion taking place on anything he ate. The doctor advised us to take him for liver transplant. But at this time covid-19 was at strike force in our country of Kenya, so we hesitated hoping everything would change with time. Unfortunately, at 1 yr nothing had changed on his health. The pruritus was worse and he could itch on to the point of bleeding. He got malnourished. His liver enzymes got really elevated, a sign of liver failure. At this point we decided to look for funds to take our son to India for transplant in December 2020. Whatever we managed to collect, at that point we traveled to India. On arrival in India, a health checkup was done and for sure our son had Alagille syndrome. His liver was very bad which was causing strain on his kidneys and heart. His bilirubin was extremely high. I, Lydiah Anyango Odhiambo, his mother, was the potential donor so I also did a health checkup. Unfortunately, my I have a fatty liver so I was put on a special diet and exercise. For sure it was hurting seeing my son going through so much pain and only me who can save him. I tried my best within 3 weeks all the fats melted in my liver and we were ready for operation on 14th of January. This day early morning I was wheeled to theater to give my son a new lease on life.

The operation took 14 hours. I stayed in the ICU for 4 days. Then, I was discharged to a normal ward. My son stayed in the ICU for 12 days then he joined me in the normal ward. Life after liver transplant, sorry to say but no one ever prepared us on what we were going to face ahead. Life is not easy. He will be on immunosuppressive drugs for the rest of his life which are so expensive in our country.  Also, extra precautions must be taken with him always. He shouldn’t be exposed to dirt. This can lead to infections which can really beat him so fast.

Baraka is really doing great. He is 2 yrs old and is thriving. Everything changed after transplant. His pruritus stopped, digestion system got restored, he is completely ok.

We thank God for this and how far he has come. He has never been admitted again since transplant. We go for post liver transplant care and Alagille syndrome checkups every month. His liver function are not yet stable but we thank God so far so good.

14th Jan, 2022, is the first Anniversary of my son’s life-saving, life-changing, life-affirming liver transplant. For me, this is two-fold. It’s a time to remember and celebrate another important Anniversary.

My son, Baraka, was given the opportunity to fight. Offered the chance to see and do more, keep promises, grab life with both hands. This time last year, denial was on my side. My last memory was commenting on the anesthetist’s tattoos and telling him how great the tattoos look. Deep down I wanted him to give me an assurance that he will keep an eye on my son. Sleepless hours, waking up in intensive care corridors, walking like a dead man due to two days fatigue. It was to a whole new world in every way, far away from home. Those close to me called it a normal day, but for me it was a day of reckoning.

We’d done it. The magnificent surgeons, led by Dr. Vivek Vij from Fortis Hospital, several wonderful teams had overcome unforeseen complications, giving me the precious gift of time. My wife and the baby now had a new fight to contend with. Recovery. Turns out it was to be an uphill struggle, but God was with us all through the journey.

But that struggle means I’m able to reflect on a year that matters, a year that counts, a year that’s given me the chance to do the important things. How do I thank so many people for giving the gift of life? After much searching, I figured this was an unanswerable question.

That said, the boy failed to take each day slowly – Tried to run before he could walk. Tried to know everything at once. Tried to recover too fast. Tried to ignore the complications. He was a million miles from a model patient. However, thanks to teamwork from friends and family and the transplant team, we’ve experienced an outstanding year. We have more than made up for lost past times and have built wonderful memories in this past year.

It’s hard to believe it’s been a year. I feel lucky. I feel thankful. I feel hopeful. These are emotions that had become alien to me.

My son is now able to do what he’d hoped to do – experience the childhood like other kids. His liver anniversary is a day of reflection. How do I sum it up? The answer to that is I can’t. My sons transplant anniversary comes with a rollercoaster of emotions with a tough yet rewarding year to look back on.

Challenges aside, we’ve had a year I didn’t think I would have. I have new-found hope and ambition. Flair and passion are back in the room. To the Almighty God, to those responsible for our past year, to those who stand close to me still, those who got me here – Happy 1 Year Anniversary to us all!

And to those facing or have faced something similar, I’ll coin a phrase – If we can do it, anyone can! Love and luck to you all. And if you’re facing transplant – don’t forget to choose your own medley of songs for the recovery room! I sign off with much love and thanks. Onwards and upwards.