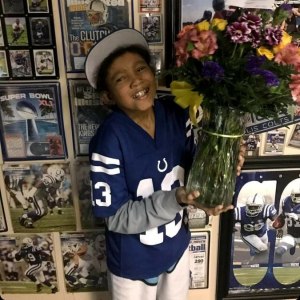 Alagille dad, Elias Otero, was recently named Fan of the Year by the Indianapolis Colts of the NFL. Otero and his son, Eli, are the father son Superfan duo who pay homage to professional wrestler Ray Mysterio, “the underdog of sports entertainment,” at every Indianapolis Colts home game, and their enthusiasm has paid off! But Otero and Eli are more than just Superfans – they are part of a family of Warriors who want to give back.

Otero’s son, Eli, was diagnosed with Alagille Syndrome as an infant. His 11-year battle has seen countless hospital visits to Riley Children’s Hospital in Indianapolis and a liver transplant in 2019. Being Colts fans already, Otero started a tradition of attending games or participating in some Colts related activities whenever the duo visited Indianapolis for medical appointments. “We wanted to make our trips fun. Going to the doctor is not a ​kid’s favorite trip so we tried to make it feel like a field trip every time,” says Otero.

Over the years, their tradition of attending games has grown into opportunities to take part in other Colts events, blood drives, 5Ks, Training Camps, draft parties and much more. Early on the family decided to use their experiences to help spread awareness about Alagille Syndrome and organizations like Alagille Syndrome Alliance (ALGSA), and Donate Life Indiana, the state-authorized nonprofit organization responsible for managing the Indiana Donor Registry.

“In Hobart, there aren’t many Colts fans with us close to Chicago, but I represent everywhere I go wearing my colors,”said Otero. “I guess you can say I’m a little overboard, but the love I have for this organization is real. These players and the ownership do so many great things throughout the year that impacts so many families dealing with the same adversities as my family. They have helped us throughout the years in so many ways. The continuous support this team shows for our communities and families in need, I know ultimately that’s what draws me to them.”

“There are so many passionate fans out there, and you don’t have to dress up to be a Superfan. In my opinion, everyone that supports their team year in year out, win or lose, all deserve to be the Fans of the Year. This game is not just about football, it’s about making a difference, driving change, spreading hope, and doing what’s right,” he added.

This year Otero submitted their story for consideration in the Colts Fan of the Year contest. Their passion and spirit along with Eli’s battle with Alagille Syndrome and consequent liver transplant struck a chord with the team. Otero was selected as the winner of the contest and named the 2021 Fan of the Year. Otero, Eli, and the family will represent their team along with the other 31 NFL team Fans of the Year at the Super Bowl in February vying for a chance at the ultimate NFL Fan of the Year title.

The ALGSA will be cheering on Otero and Eli!  Click HERE to learn more and donate today!