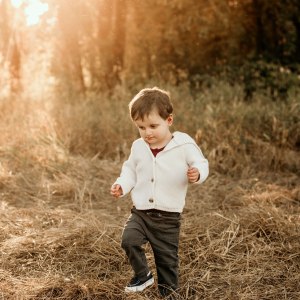 Hi, my name is Anna. Our family consists of myself, my fiancé Dillon, daughter Amelia, and two sons, Derek and Andrew. Derek has Alagille syndrome. We live in Ridgefield, WA.

During a rough pregnancy, with a lot of back and forth and no answers as to why Derek was growing so slowly and having so many complications, he was born at 37 weeks on 6/22/19, weighing in at 4lbs 6oz. An echo was done on his 2nd day of life, but it wouldn’t be until 2 months later when we saw the cardiologist. There, we found out his pulmonary artery was dangerously small. He had hernia surgery at 4 months old, and after genetic testing, was officially diagnosed with Alagille Syndrome in October 2019. Shortly after that, Derek had his first cardiac cath procedure so we could get a better idea of what was actually going on in his heart and lungs. It wasn’t as we had hoped, and Derek underwent open heart surgery at 5 months old. The surgery went great, however, the day he was to be discharged, the left side of his diaphragm collapsed and he was taken in for another surgery to fix it. One week later he was sent home and we were able to spend his first Christmas together as a family.

Things calmed down for a while. We were going in just for regular, routine check-ups and cardiac catherizations every 3 months. At about 18 months old, Derek’s itching started to become unbearable! We tried many different tricks and medications with no luck. Finally, the new Livmarli medication was approved by the FDA in the US and Derek was able to take it by prescription. It has worked wonders ever since.

Our biggest challenge with Derek still is communication. He has been delayed in speech and communication skills due to countless ear infections, finally getting tubes put in his ears about a year ago. We do speech therapy once a week and he is on his way to saying words! Derek still has many hurdles to overcome and things about him that will forever affect his daily life like being born with only one kidney and having a milk protein intolerance. He is full of mischief and spunk. Every day is an adventure with him.

While the unknown of what the future holds for our family is scary at times, we wouldn’t have it any other way! Derek has given us ALL a new outlook on life and makes us sure to love and appreciate those we have, while we have them. ❤️ We love you, bubbas!!