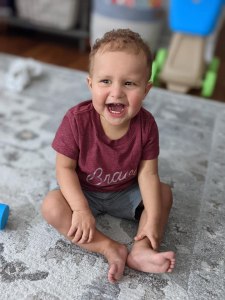 We are the Lampear family, Kayla, Jon, Jackson, and Elijah. We live in Michigan. Our son Elijah was diagnosed with Alagille Syndrome.

Elijah was jaundice at birth. It persisted until his two-month checkup, so his pediatrician sent us to the hospital for further investigation. After being transferred to a Children’s hospital from there, he received a liver biopsy. The biopsy confirmed he had cholestasis, but we didn’t know the cause. During that hospital stay he had an ultrasound of his heart which revealed ventricular septal defect (VSD). Immediately following up with a cardiologist, outpatient, they discovered the VSD had closed and that he had branch pulmonary stenosis also. Unfortunately, covid started and all future appointments were cancelled with Elijah’s gastroenterologist, making it hard to follow up on the cholestasis. We were still trying to understand what kind he had, so we switched to another GI team at a larger hospital with more experience, C.S. Mott Children’s Hospital in Ann Arbor, MI. During our first visit there, they suspected he had ALGS which was confirmed within a few months after genetic testing.

Elijah takes 6 medications daily, and most are multiple times a day. He sees his liver team monthly and his cardiologist once per year. He has had surgeries including the liver biopsy at two months old, a heart cath to check the narrowing of his arteries when he was about nine months old, and very recently had an internal biliary diversion just before his second birthday. His biliary diversion had some complications which resulted in staying 11 days in the hospital. He also had an additional surgery to fix an intussusception of his intestines. Elijah continues to have jaundice which we know has caused discoloration of his teeth. Until the biliary diversion, he was extremely itchy. He has xanthomas and common facial features of those with Alagille Syndrome. He is also small for his age.

Our family has dealt with an overwhelming amount of stress at times, made more difficult when Elijah has procedures or appointments. During those times, making sure our oldest son is taken care of is a stressor and taking time off work so both of us can be with Elijah has been an issue. Fortunately, Jon’s employer is willing to work with us and understands the seriousness of Elijah’s disease. Through the Alagille Syndrome Alliance (ALGSA) we have made friends that are further along in their Alagille diagnosis than us. They have been there to answer any questions and give support.

For newly diagnosed families coming to the ALGSA support pages, know there are a lot of great people in the ALGS community. They can give some great advice, and every case of Alagille Syndrome is different so just take things as they come. We understand ALGS can be overwhelming. It’s important to know you are not alone.

We support the Alagille Syndrome Alliance. They work on behalf of our Alagille community for better treatments and someday a cure, our hope. We feel the best ways to support the cause are to donate and spread awareness. There is still so much to learn about this syndrome that affects so many people but is still so rare and unknown. Please share information about the Alagille Syndrome Alliance, get involved, donate, and spread awareness. We just want Elijah, and all those suffering with ALGS, to have a happy and healthy life.