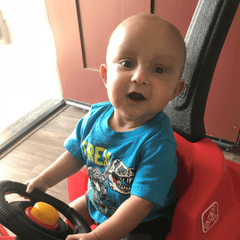 Greyson is a happy 9 month old who had a liver transplant last month. This is his story.

It all started when Grey was born. He was 3 weeks early and was very small, born at 5lbs 4oz. His temperature was low and wouldn’t regulate, also his blood sugar was very low so right after birth he was taken to the NICU where he was supposed to get an IV and come back to my postpartum room after an hour. Four hours later my husband (who followed Grey to the NICU) tells me they’re keeping him longer. Finally after struggling with low temperatures and blood sugars we went home on day 4. We went to get Grey’s blood drawn the following Monday and his bilirubin was high which was normal for a newborn. As time went on his bilirubin finally plateaued.

When Greyson was 2 months old his pediatrician decided to check his bilirubin levels because we called the week prior reporting Grey’s yellow eyes and the results were abnormal. They told us his bilirubin level was very high and a number of tests needed to be done before determining what the problem was. After an entire day of  tests we got the scariest call ever. Greyson’s liver was not working the way a normal liver should. This call followed more tests, imaging, doctor’s visits and finally a call from a GI doctor who basically said she was going to refer use to a surgeon. This happened on Wednesday right before thanksgiving, we got the call from the surgeon on Friday at 8a.m and Grey got scheduled to have surgery the following Monday. At this point they suspected that Grey had a condition called biliary atresia. He had a “Kasai” where his bile ducts and gallbladder were removed. His bilirubin started to go down to a normal level, but all of the sudden, it started to go up again. The same day he had surgery he had an echo and that was the first time we ever heard of “ALAGILLE SYNDROME”. Our cardiologist told us about this syndrome and that it was very possible that Grey had it but genetic testing would have to be done to determine that. This conversation happened literally 20 minutes before Greyson’s Kasai. We had no idea what this was and we had never heard of it. This is not a genetic condition that runs in our family so it was very heartbreaking and confusing for us to hear as first time parents.

In December (1 month after Grey’s surgery) after realizing that Greyson was as yellow as ever and his bilirubin was through the roof I finally decided to ask his GI doctor to refer us to a hepatologist, which she did. We meet with one of the best hepatologists in January who also specializes in kids with ALGS. He basically told us that Grey would either get better or get worse and that only time could tell. Fast forward to March, Greyson’s INR was so abnormal we got admitted to the hospital for vitamin infusions and had to go by ambulance because it was too risky to put him in the car for an hour drive. This trip prompted the call that would change everything for us. Although we knew transplant was a big possibility we did not know how soon that could happen. The day we got home from the hospital we got a call from the transplant coordinator who scheduled us to go see her. We had an online appointment for liver transplant orientation and to be honest I thought this would be years down the road. Turns out Grey was getting extremely sick, not eating/growing, throwing up on a daily basis. He ended up getting an NG tube which did not help that much because his bili was so high. The highest bilirubin he ever had was 43.2 and they told us that he just wasn’t going to grow or gain weight because of his bilirubin.

At this point we were trying to get cleared for surgery which we didn’t know when it would happen. Finally my husband and I accepted the fact that our baby boy would be needing a new liver sooner than later. But that also came with some challenges since Grey had an ASD and pulmonary stenosis. Before he could have any type of big surgery he had to get his ASD patched and have a balloon catheter to open his left pulmonary artery. He had this done and finally on April 10th he got OFFICIALLY listed for transplant. On May 10th we got the call that Grey had a liver offer and it was a good match. Now, this is when it gets tricky, we got our hopes up, then they told us this was most likely not the liver for him. A day later they said it was most likely it, then finally we got the YES for sure and on May 13th (Mother’s Day) at 3a.m I got the call that the old liver was out and the new one was going in! This was the happiest day of my entire life. It felt like giving birth all over again. Grey was in the PICU for almost 2 weeks, then got transferred to the pediatric floor and finally we left the hospital to go to “Family House” where we could walk to the hospital since we live 50 miles away.

These days Greyson is gaining weight, eating solids, playing, growing appropriately and hitting milestones one a time. Saying his first word “da da” and finally living the life he was meant to live. Thanks to organ donation. Our donor family and their child have the most special place in our hearts! We are going to be grateful for the rest of our lives! Our hope is to inspire people to advocate for their children and empower them to be the best version of themselves no matter what!