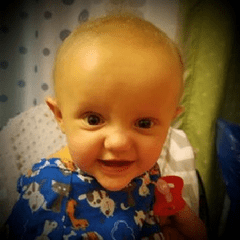 Our family is relatively new to the ALGS world.  Shortly after he was born, our son Bryce was diagnosed with Alagille syndrome.  It has been a rollercoaster ride since then.

We originally learned that there were some serious concerns with our Bryce’s heart during our 20 week ultrasound. After multiple referrals and echocardiograms, we were told that our son Bryce had Hypoplastic Left Heart Syndrome (HLHS). We were closely monitored and at 30 weeks the decision was made to have me hospitalized to keep a closer eye on Bryce. At 32 weeks, labor was induced due to concerns about spontaneous miscarriage and in September we welcomed our 3 lbs. 1 ounce baby boy.

Within a day of being born, Bryce’s left ventricle and atrium filled in the appropriate amount of space and we quickly went from discussing HLHS to learning about Alagille Syndrome. At birth it was discovered that Bryce had 3 butterfly vertebrae, the posterior embryotoxin present in his eye, and severe jaundice. During Bryce’s 29 stay in the NICU, we met with several specialists and had genetic testing completed to confirm the Alagille diagnosis.

Bryce is now almost 8 months old.  He has been in and out of the hospital during the last few months for NG tube placement, Central IV line placement, ear infections, concerning blood work and most recently the flu. In March we met with the Liver Transplant team and it was decided together with is medical team a liver transplant would be the best (and only) option to ensure our sweet boy is able to live a full and healthy life. Next, Bryce will have an exploratory heart catheter procedure to take care of his pulmonary hypertension prior to being listed on the national transplant list. After that, we wait.

As we anticipate the transplant, as a family we feel both scared and excited. Bryce has been a fighter thus far and we are excited to one day have a healthy, thriving boy.