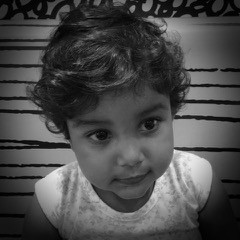 My name is Shanika.  I am originally from Sri Lanka and now live in Singapore.  I have two daughters.  My elder daughter is 7 years old.  My other daughter Kayara is 28 months old and has been diagnosed with Alagille Syndrome.

When I was pregnant with Kayara, we were told that there are some abnormalities in her spine and heart. We were assured that her conditions were not life threatening. She was born 5 weeks prematurely and was slightly jaundiced at the time of birth.

When Kayara was 7 weeks old we noticed she had a slight temperature and we took her to the KK Women’s and Children’s Hospital in Singapore.  We stayed nearly 2 weeks in the hospital while Kayara was evaluated and tested.  The medical team ruled out biliary atresia and continued to perform numerous other tests before suspecting Alagille Syndrome. Kayara then had a liver biopsy and blood tests sent to the United States for genetic testing which confirmed the diagnosis.  Waiting for the results were the longest two weeks of our lives.

Kayara’s doctors are monitoring and evaluating her liver, heart and eyes. She is also seeing a dietitian. Her condition is stable thanks to the medicine and vitamins. Her Doctors in KK hospital is doing a great job as well. Her appetite has improved.

I think Alagille families understand each other. Sometimes it’s hard to explain to other’s what we are going through.  I feel first year was the toughest. Now we have more or less gotten used to the routine. But there is heaviness in our hearts, which will never go away.